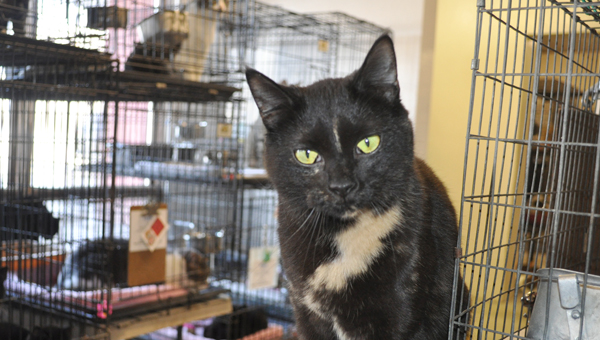 Katy is 1 1/2 years old and was born at the Mower County Humane Society shelter. MCHS volunteers officially kicked off a fundraising campaign for a new shelter to better care for cats like Katy so they can be placed into good homes. — Trey Mewes/trey.mewes@austindailyherald.com

The Mower County Humane Society animal shelter and the city pound both need space, and officials are in tentative talks to share land where each would build or retrofit its respective building.

The Mower County Humane Society officially kicked off its fundraising campaign for a new animal shelter this month. 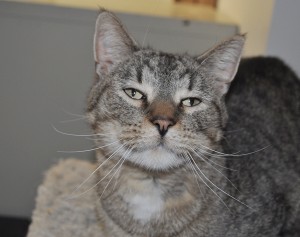 Leo Longtail is one of about 100 cats at the Mower County Humane Society shelter. MCHS volunteers are planning for a new shelter which would hold just as many cats, though volunteers hope more cats can be adopted.

MCHS volunteers quietly accrued over the past several months more than $400,000 in donations, along with donated land on Highway 218 South. They hope to raise about $200,000 more for a 9,000-square-foot shelter that would hold about 100 cats and 20 to 25 dogs, the same population the current humane society shelter holds.

“This is not designed to be an expansion,” Lutz said. “The biggest thing is it just gives us more room and a better layout for keeping the animals healthy and keeping the area clean.”

The new shelter raises opportunities for closer ties to the Austin Police Department and the city pound.

“It’s definitely worth exploring,” said Police Chief Brian Krueger. The current city shelter has been in existence for more than 35 years and holds fewer animals than the humane society. Moreover, the city shelter’s animal policy dictates pets of any kind can stay for 10 days before the city euthanizes them, which goes against MCHS’s no-kill policy.

While differences in policies prevented the city and MCHS volunteers from finding a solution in previous years, sharing land means transportation and medical costs would be cut down for both, since MCHS often pays for an animal’s care at the pound when volunteers know they’ll be taking it in.

“It’s a good, win-win situation that we can work a little closer together,” said Kelly Rush, MCHS volunteer.

How the buildings would look or where they would share land remains to be seen, but MCHS volunteers have met for months to work out solid building schematics, which they hope to finish by the annual MCHS Pasta Dinner fundraiser on Feb. 19. In addition, the donated land they received doesn’t have utilities set up and contains a grove of trees which would have to be removed. The Humane Society declined to comment where the site is on Highway 218 South.

There is no concrete agreement between the city and MCHS, though MCHS volunteers met with city administrators two weeks ago. Krueger gave the City Council an update on the possibility last week during the council’s retreat and Community Development Director Craig Hoium is looking into possible sites for the two buildings, which have to be at least 500 feet away from residential areas.

Though MCHS volunteers will finalize shelter details this spring, they’re asking local residents to support the new shelter, which would include under-floor heating, better ventilation, cordoned-off sections for big dogs, small dogs, and rooms for groups of cats.

“We’ve got enough money donated that we can actually be serious about looking at (a new shelter) now,” Rush said.

Residents interested in donating can do so at the February Pasta Dinner, or by sending in donations via campaign brochures, which can be found at the Austin Public Library, Double K Specialty, Inc., or at the Humane Society during public hours from 4:30 to 6 p.m. Tuesdays and 2 to 4 p.m. Sundays.