When skateboarder Tom Vee saw the movie “Toy Story” for the first time, he was mesmerized by the character of Sid and his footwork on a skateboard.

“My mind was blown,” he said on Tuesday, standing in front of students in the gym at Southgate Elementary Schools. “But I had no clue how to get up in the air. I was so confused — but, that’s where science starts, with questions.”

Evan Breder flies over a bar in demonstration of skateboarding — and science.

Vee and fellow skateboard enthusiast Evan Breder spent the next hour at Southgate Elementary School, demonstrating how their actions on their favorite piece of equipment — the skateboard — could be explained with the laws of physics.

“Science starts when you have questions; then you start to experiment,” Vee added.

The pair hit on the principles of lift, friction, gravity, balance, energy and equal and opposite reactions during their demonstrations — displays of prowess on skateboards as they jumped and twirled and even leapt over stacked skateboards.

The show was a hit with the kids, who asked lots of questions and showed their appreciation with lots of applause.

The pair come from Philadelphia and tour with the company called Wondergy, whose aim is both entertain and educate. 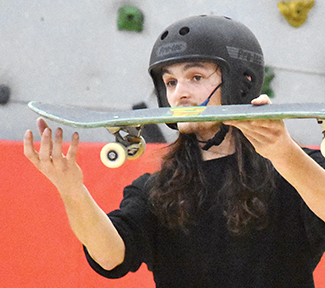 Focusing on the future; With Snee in top spot, Hormel shares plans for growth with shareholders