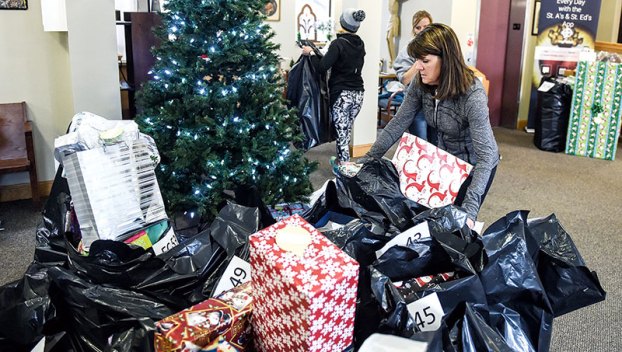 Kelly Collier goes through bags of presents as volunteers organize the gifts donated as part of the Giving Tree at St. Augustine’s Catholic Church Tuesday. Photos by Eric Johnson/photodesk@austindailyherald.com

Earlier this week, if you were to walk into the church, you would have found gifts everywhere. Inside the main entry, down some halls … everywhere there were gifts, and it’s all a part of the Giving Tree program that St. Augustine’s and St. Edwards Catholic Churches host.

The program is geared toward making sure families in need get the best out of Christmas.

“It’s to help families who are in need,” said Father James Steffes. “To bring some joy and help into their Christmas.” 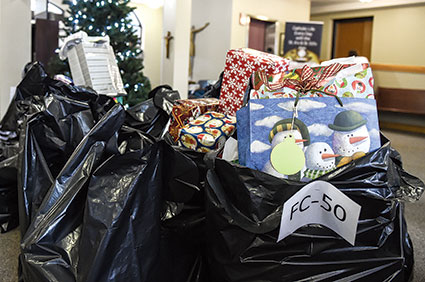 Just after Thanksgiving the tree goes up and ornaments in the form of tags containing the names of the families taking part in the program are hung.

After they go up, parishioners can take one or even a few tags in order to share gifts at Christmas, and this year has been one for the books.

A total of 44 families will be helped by the effort this year, receiving 447 gifts given to 121 children. It’s come a long way from the first year in 2011, when a single family needed help.

“2011 was the first year and it was one family,” said Mary Gorman, who leads the organization of the program from St. Augustine’s. “But the next year it exploded.” 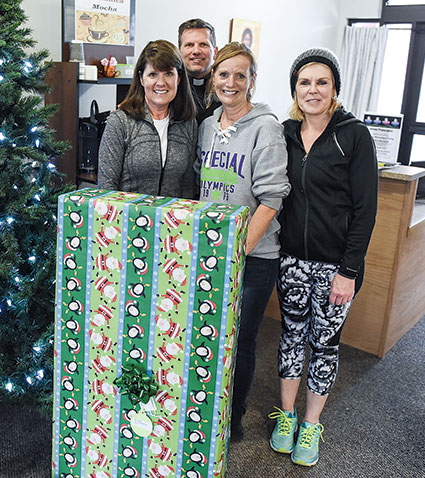 Volunteers Kelly Collier, from left, Linda Keenan and Kristi Stasi pose with Steffes and gifts from the Giving Tree.

While that first year was only to help one specific family, the next year was a fully hashed out effort in order to help others.

“It was one family and the next year we thought maybe there were others,” Steffes said.

Along the way it’s been a learning experience for those volunteering as the number of presents has jumped. Organization takes up a good chunk of the volunteer’s time.

“Every year we get more efficient,” said volunteer Linda Keenan, one of those who spent three hours at the church Tuesday to organize and prepare the gifts for delivery and pick-up. “That first year was terrible.” 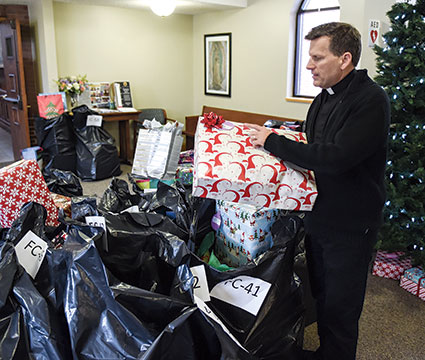 Father James Steffes shows off the tags used by volunteers to organize gifts given through the Giving Tree at St. Augustine’s Catholic Church.

Steffes said that the initiative has been fully embraced by people who attend the two churches.

“People love to do it,” he said. “They want to be generous and some want to do it because they don’t have children or grandchildren anymore.”

Steffes also explained that effort goes hand in hand with the Advent calendar and the season itself.

To see so many people take part in a program that spreads so much happiness can be a moving reflection of the Christmas season.

Kristi Stasi looks over gifts form the Giving Tree as volunteers organized them earlier this week.

“It’s very moving to me to see the generosity of the people and parishioners who are giving,” Steffes said. “I’m moved by the people who receive them, just to see the joy and hope. Some have hard times and they are not sure how they will give gifts for their children.”

He also thinks that perhaps there is a pay-it-forward aspect to this and that those who need the help today, may be able to provide help for others in the future.

“Right now you may need to receive help, but someday you may be able to give and that’s the message of Jesus Christ,” Steffes said. “It’s always the bigger message.” 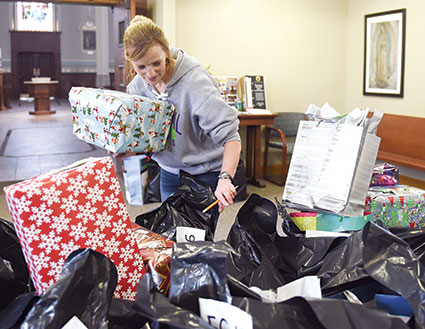 Linda Keenan goes through gifts to organize them earlier this week at St. Augustine Catholic Church.

MANTORVILLE  — Sheriff’s officials in Minnesota have started the extradition process to bring a woman convicted of killing her look-alike... read more