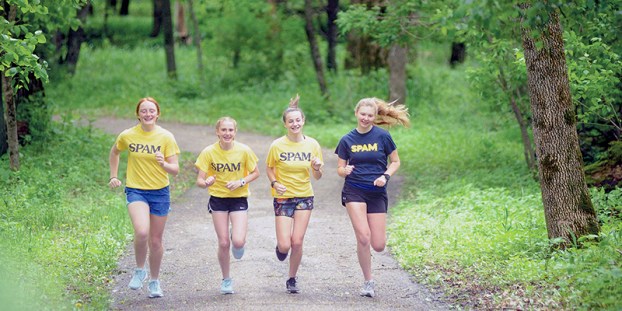 Finding a bond on the path

In a time when there are no team competitions or organized practices, four Austin girls found a way to build a bond and push themselves to their physical limits all in the span of one day.

While some people were taking it easy Memorial Day weekend, Lauren Schmitt, Cassidy Schute, Marissa Schute and Nadia Vaughn were running their very first marathon – in a very unorthodox manner. The four girls, who are all on the Austin track and field and cross country teams, ran 26 miles in 24 hours, starting their trek on 1 p.m. Friday and ending it at 1 p.m. Saturday. 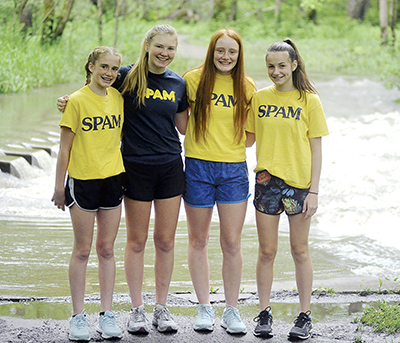 They completed the task by running one mile at the top of each hour and they started the day with the goal of running 24 miles in 24 hours. Once they closed in on the 26-mile mark, they decided to push themselves a little harder to log in their first marathon.

“When we hit 24 hours, we figured why not just keep going and do a marathon,” Cassidy said. “We just wanted to be able finish the challenge and say that we completed a marathon.”

The girls spent the night at the Schute household and did most of their runs on country roads. They battled soreness and general fatigue, but they never lacked motivation or companionship.

While the girls didn’t get to sleep for more than 45 minutes consecutively during their one-hour pledge to running, they did find some time to take a break.

“We took a couple of power naps,” Vaughn said. “We would go out, run a mile and then take a break. We kept doing it over and over again.”

As starlight gave way to dawn, the girls were presented with one final challenge on Saturday. The skies broke and provided a set of heavy rains, but it didn’t hamper the spirit or slow down the girls. They ran on and they were strong, even if it meant they would be sore for the next week.

“The last mile was a pour down,” Marissa said. “This was the first time for any of us doing a marathon and it was a really cool way to do it. This is helpful for us to get in shape for when our seasons get started. This was good for team bonding.”

Chris Thompson is an NFL running back. He also is the father of a 4-month-old daughter, Kali. Guess which of... read more