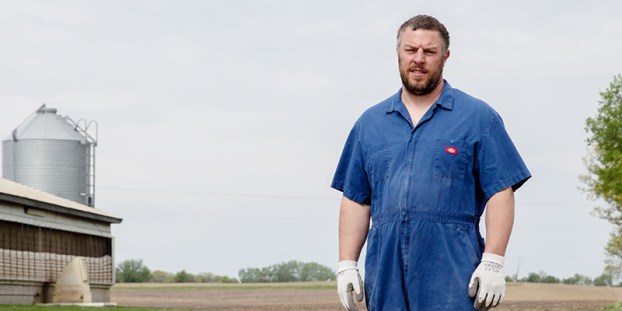 Pig farmer Todd Selvik at his farm in Waseca, Minn., on May 16, 2020. Plant backlogs caused by the pandemic are forcing farmers to destroy their products instead of shipping them to market. The situation is heaping more stress on farmers. Evan Frost | MPR News

Todd Selvik wants to forget the trauma of putting down 500 pigs recently on his family’s farm.

“It tore me up enough, even though I tried to block it out as much as you can. It tears me up, it really kind of just messes with you,” he said.

Low commodities prices, tariff wars and other troubles have made the last few years some of the toughest for farmers. And that was before the pandemic forced hog farmers to destroy their animals, or chicken farmers to dump eggs and dairy farmers to pour out milk.

All of it is taking a toll on farmers’ mental health.

Selvik raises about 25,000 pigs a year, plus some soybeans and corn on his farm near Waseca, Minn. His dad still helps out, despite retiring last year. Selvik’s uncle and cousin also work on the farm, along with a couple of farmhands.

But when it came time to kill the pigs, Selvik insisted on doing it himself.

Market disruptions caused by COVID-19 are forcing farmers to destroy their products instead of shipping them to market. There’s a narrow window when pigs are the right size for the slaughterhouse, Selvik explained. If the animals get too big, they can’t be used.

Selvik sells his pigs to three places, including the Tyson plant in Waterloo, Iowa, and the JBS plant in Worthington, Minn., both of which shut down temporarily because of outbreaks of the virus among their workers. When he started having trouble getting trucks to take his pigs to the plants, Selvik knew he was going to have to do something.

Even so, it was a tough decision, “It pretty much consumed my life. My wife can tell you, that’s pretty much all I had on my mind. Talking to vets, talking to friends, did you have to do this?”

Uncertainty is a given in farming. The pandemic magnifies the uncertainty.

Some farmers have called Monica McConkey, a rural mental health specialist, to talk about their coronavirus concerns. But far more have sought her help in dealing with strained relationships caused by the pandemic.

“Underlying that is a lot of fear, of uncertainty of what are we going to do,” she said. “We don’t know what is it going to look like in a month, in two months. That’s the interesting thing with COVID[-19] for any of us is there’s no end date.”

It’s not just the uncertainty and lost income that’s weighing on farmers these days. They care about what happens to their animals, said Lee Johnston, who studies the hog business at the University of Minnesota Extension Service.

“And this animal that they’ve cared for and tried to make comfortable and meet their needs and so forth to be harvested for food is euthanized and put in a landfill or compost pile and that’s very hard for stock people to take,” he said.

It doesn’t matter that his pigs were originally going to end up as bacon or pork chops, said Selvik.

“Either us or my employees have been in that barn with those pigs every day for the last six months of their lives,” he said. “Granted we’re not on a first name basis with all of them. They’re a part of our lives as we’re a part of theirs. It’s quite personal.”

In the end, Selvik decided that euthanizing 500 pigs gave his business the best chance that the next round of animals would make it to market. He hopes he doesn’t have to make that call again.