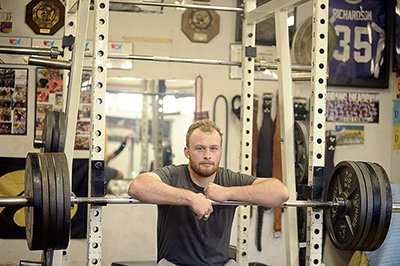 Taking it to the mat: Grand Meadow’s Wyatt Richardson looks back at a successful wrestling career

GRAND MEADOW — Wyatt Richardson is at his best when he faces his biggest challenges.

The 2015 Grand Meadow graduate has grown up in competition and in the wrestling room. He’s never been one to complain about the bumps and bruises the sport has thrown his way, even when he missed his sophomore season at Augsburg College with a shoulder injury.

When Richardson is down, he’s always found a way to get back up. He went 55-28 overall with 18 pins during his career with the Augies. Even more impressively, he was never pinned, never lost by tech fall and only lost by major decision three times.

Richardson grew up with a wrestling room and weight room and he has a tattoo on his arm of a Dan Gable quote that reads “Once you’ve wrestled, everything else in life is easy.”

“In wrestling, you have your highs and lows, physically and mentally. You get beat up,” Richardson said. “But once you’re out of wrestling, there’s nothing that’s really hard after what we go through every day. Some days fists are being thrown and the next you’re hanging out and watching a movie with the same person you just cracked across the face.”

Richardson was a member of the Augies team that won a Division III National Championship in 2019. It was the program’s 13th national title. Augsburg also advanced to the National Tournament this season before the season was called off due to COVID-19.

Richardson remembered being shocked in his first practice with Augsburg when the team started things off with a 10-mile race, but he said the biggest adjustment has been the talent he has seen in the wrestling room. Richardson wrestled at 197, which is the same weight as Lance Benick, who won a national title in 2019.

“Lance Bennick is a crazy athlete and Solomon (Nielsen) has a motor like a mustang,” Richardson said. “You have a lot of different looks.”

Richardson took third in two Minnesota State High School League State Wrestling Tournaments, where he was eliminated by the No. 1 ranked wrestler in the nation both times in the semifinals. He played in three state tournaments for the Superlark football team as a lineman, bringing home two state titles.

Richardson still has his Grand Meadow football jersey and helmet on display in his family’s weight room, but he also treasures his championship ring from Augsburg. 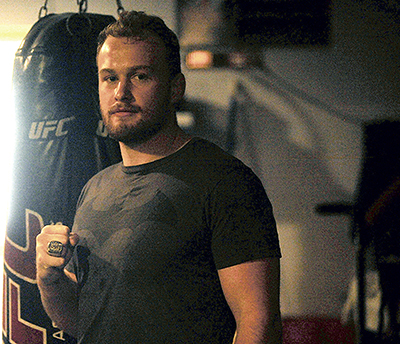 Grand Meadow grad Wyatt Richardson presents his national championship ring, which he won as a wrestler at Augsburg. Rocky Hulne/sports@austindailyherald.com

“For me personally, wrestling has been more of my life and that meant the most to me. Especially with the adversity I had to face with that shoulder surgery,” Richardson said. “Although, with the very first (football) state title we had, I don’t know if anything can compare to that. Everyone was saying Clinton-Graceville-Beardsley was going to win it and then a whole bunch of their guys got hurt. We ended up winning it and the whole town was there. I don’t know if you can really beat that.”

Wrestling motivated Richardson to stay on the right path in college and he’s now looking forward to the next step in his life. He interned with the Bureau of Criminal Apprehension as part of the human trafficking department recently and he has a major in sociology with a focus in criminology. Richardson is looking to get into law enforcement and his dream job would be to take over his dad Jim’s spot as Chief of Police in Grand Meadow.

Richardson is going to take a year off of wrestling to see how his body feels, but there is no chance that he stays away from the sport for long.

“Yesterday I ended up chipping my tooth while working with a practice dummy,” Richardson said. “I don’t think I’ll ever be out of it. I think I’ll end up coaching or something.”

As Richardson looks back on his run with Augsburg, he treasures the support he received in his hometown. He credited the Olson family and Troy Gilbert for keeping his spirits up throughout his run with the Auggies.

“I always thought about Grand Meadow and the families that had my back,” Richardson said. “If it wasn’t for all of the coaches I’ve had, it would’ve been a lot harder to make it through.”

In a move that surprised some city council members, Austin Mayor Tom Stiehm announced Monday evening that he would not... read more