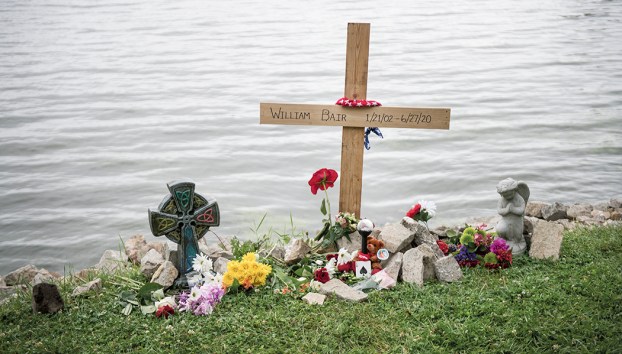 Crosses, flowers and other items could be seen Monday near the site where a missing Albert Lea man was found Sunday along the edge of Fountain Lake. Colleen Harrison/Albert Lea Tribune

The body of a missing 18-year-old man has been found in Fountain Lake, according to the Freeborn County Sheriff’s Office.

A press release stated the Sheriff’s Office received a call from a supervisor of the Albert Lea Police Department to help search the lake for the body of William Edward Bair of Albert Lea, who was reported missing at 6:51 a.m. Saturday. A social media post shared Saturday said Bair was last seen around 2:30 a.m. Friday morning near Cedar Avenue and Massee Street.

According to the Sheriff’s Office, two sergeants responded with the department’s patrol boat, which has a side-scanning sonar. The release stated while the search was ongoing, the body was found in the lake by a family member searching from the shore.

The body was recovered at 11:57 a.m. Sunday from the water’s edge near Lakeview Boulevard and Wedge Street and was later identified as Bair, the Sheriff’s Office said.

Information about the length of the search was not immediately available.

The body was transported to the Ramsey County Medical Examiner’s Office, and the incident remains under investigation.

The Minnesota Department of Health on Monday reported 43 new cases of COVID-19 were confirmed in Mower County from Friday... read more