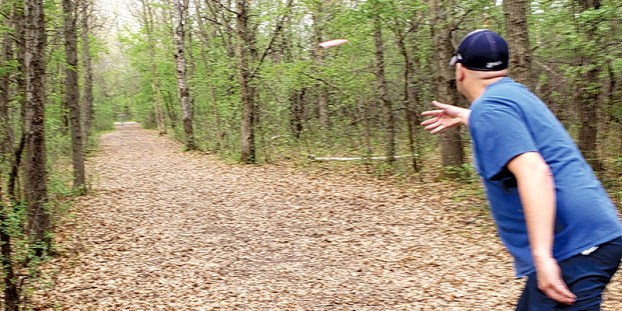 Taking in some disc golfing. Photo by Amanda Gafkjen

I am by no means excelling in my abilities to throw the disc-shaped plastic objects much further or more accurately over time, but I am certainly gaining my appreciation for a simple, affordable sport that can take you to places you may have never seen otherwise.

In the past four years, I’ve thrown discs in the Rocky Mountains, the Black Hills in South Dakota, and of course I’ve thrown discs in Driesner Park in Todd Park. There is a certain peace that comes over you when you walk through a wooded path, flush with the chirping of birds and glimpses of the occasional deer. Of course that stunning state of being is often interrupted by a good cursing rant when my disc ends up getting lost in tall grass, or stuck in the middle of those magical woods.

Even with its trials, I have learned to love disc golfing. 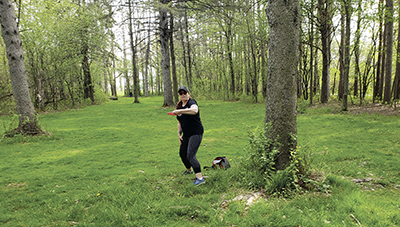 My fiancé, Amanda Gafkjen during a recent outing. Rocky Hulne/sports@austindailyherald.com

The discs are incredibly cheap and almost all courses are free to play. Plus, you never know what or who you’re going to see.

A couple of years ago, I played disc golf with my brother at a farm near La Crosse, Wisconsin. Some of the holes were 500 feet and the course was well beyond our ability. We finished the day, covered in sweat and swarmed by bugs. At one point we were stung by a rare weed that left us writhing in pain for a solid minute.

I think it was about the 13th hole when we lost track of where we were going and headed back to our car. We had every right to be complaining and throw a fit as we felt the heat burn down our backs with no water to quench our thirst. However, as we pulled away, I focused on the words that the farmer told us when we paid him the $1 fee he charged to his course.

“When you find something you like doing, do it as much as you can.”

Those words still echo in my mind, and there has never been a scratched leg, a lost disc, or an awful throw that has made me not want to go out and play a round of disc golf. I’ve already hit up the course at Bear Cave Park in Stewartville and a small course in Spring Valley this summer, and I plan on hitting a lot more this summer as the pandemic has put all sports on hold.

It’s a great way to see new things and get your body moving at the same time.

The Austin City Council unanimously approved the creation of a temporary administrative process for the approval of temporary outdoor seating... read more