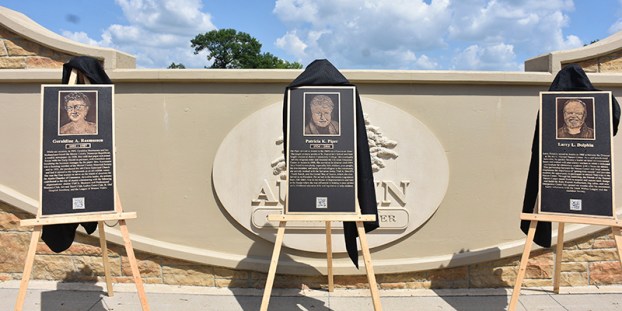 Geraldine Rasmussen, Patricia Piper, and Larry Dolphin were selected as the 2020 Pillars of the City. Mike Stoll/mike.stoll@austindailyherald.com

Since 2016, individuals that have had an impact on the City of Austin have been selected by the Committee to be honored with a plaque placed on the floodwall.

Each plaque contains an engraved image and biography of said individual.

The unveiling ceremony was held at the North Main Street floodwall. Unveiling ceremonies are typically held at the Community Bandshell during the annual Freedom Fest; however, the committee had to find a new location after the Austin City Council cancelled the 2020 Freedom Fest event due to the COVID-19 pandemic. 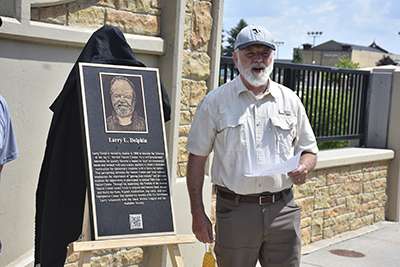 Naturalist and former Jay C. Hormel Nature Center Director Larry Dolphin offers words of thanks after being named as one of the 2020 Pillars of the City. Dolphin was the only surviving 2020 inductee. Mike Stoll/mike.stoll@austindailyherald.com

Patricia (Pat) Piper came to Austin in the 1960s as a Franciscan Sister. She taught primary grades at St. Augustine’s School and later taught courses at Austin Community College.

She eventually left the religious order and founded the Christian Education Center in Austin in 1968, serving as its director until 1994. As a friend to everybody, especially little children, poor people, the downtrodden, and newly arrived refugees in the community, she actively worked with the Salvation Army, YMCA, Sheriff’s Youth Ranch, and the United Way of Austin, where she also served as president.

Piper served in the Minnesota Legislature from 1983-2001, first in the House of Representatives and later in the Senate, where she was influential in helping to pass several early childhood education bills and legislation to help children.

While on vacation, in 1919, Geraldine Rasmussen and her husband purchased the weekly newspaper Mower County Transcript-Republican. In 1920, they sold the paper and joined forces with the Daily Herald as partners; Rasmussen later became the business manager for the paper. Rasmussen was a founding member of the Mower County Historical Society.

In 1953, she purchased the old Christ Episcopal Church and had it moved to the fairgrounds as an art exhibit venue. She was the first woman to serve on the Austin Chamber of Commerce’s Board of Directors.

As a civic leader, she actively contributed to the city of Austin and volunteered with the following organizations: Austin YMCA, Business and Professional Women’s Club, Art and Travel Club, Ladies Floral Club, St. Olaf Hospital Auxiliary, and the League of Women Voters.

Larry Dolphin moved to Austin in 1988 to become the director at the Jay C. Hormel Nature Center. As a self-proclaimed naturalist, he quickly became a leader on local environmental issues and worked with area science teachers to create a dedicated curriculum for elementary students with a focus on nature.

This partnership between the Nature Center and local schools emphasizes the importance of “getting kids outside” and provides students the opportunity to participate in annual field trips to the Nature Center. Through his leadership, the Friends of the Hormel Nature Center raised funds to acquire and restore land, design and build the Ruby Rupner Auditorium, log cabin, and new Interpretive Center that opened six months after his retirement. Larry volunteers with the Izaak Walton League and the Audubon Society.

Those wishing to nominate someone for the Pillars of the City can find an application at www.ci.austin.mn.us/PillarsApplication.pdf. The deadline for 2021 nominations is Dec. 31, 2020.

It takes a lot of courage and stamina to jump into a cold pool and swim until your arms are... read more