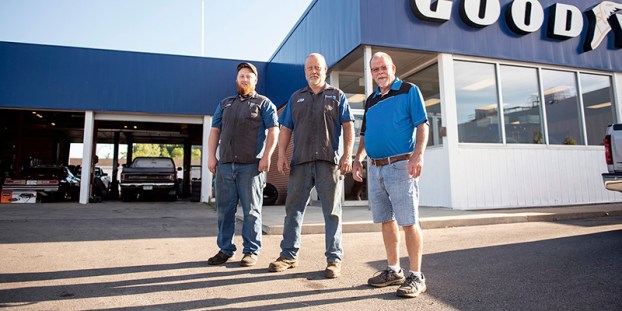 After over four decades in the tire business, Bruce Turner, right, is retiring and selling the business to Matt and Jacob Stark. Eric Johnson/photodesk@austindailyherald.com

For three decades, Hanson Tire Service owner Bruce Turner has been behind the counter helping people with their tire needs and answering phones in Austin.

However; after 32 years at the Main Street North location, Turner is ready to put down the phone as he heads into retirement.

Even though Turner and Hanson Tire have been a mainstay in the community, he has been in the tire business for longer than that, starting young in the family business. At that time, Hanson Tire was a chain owned by Goodyear.

“My step dad was part owner,” Turner said. “I started rolling tires in the warehouse when I was 12, 13-years-old.”

It certainly wasn’t a career at that point, but after years or working in the business, it was time to make a serious stake in it.

After some time away from tires, working in the carpentry field, he had the opportunity to come back to Hanson Tire. During the time he was getting back into it, Hanson Tire, which had 13 locations at one time, began shrinking, so Goodyear gave managers and owners the opportunity to purchase the location.

In 1988, Turner started with a partnership, “with the boys in LeRoy,” he said.

Since then, Hanson Tire has become one of the most well known places to get tires and oil changes in Austin.

Turner attributes that success to the staff that have been working there over the years as well as the loyal customer base.

“It’s a great workforce,” Turner said. “And customer satisfaction that knows we do the job right the first time and are reasonably priced.”

Still, after so many years of quality time with Hanson, Turner has looked at retirement for awhile now.

“It’s been on my mind for properly over a year now,” Turner admitted. “I’m one of those people that doesn’t want to retire and then a couple years later fall into a health problem. I wanted to enjoy life.”

Even though he’s retiring, he’s leaving the business in good hands as Matt Stark and his son, Jacob, will be taking over ownership of the store.

“Matt Stark has been my partner for a number of years,  so he and his son Jacob will be purchasing the business,” Turner said. “I think they will do well.”

With eyes going forward, Matt hopes that they can continue the tradition Turner and Hanson Tire has built over the years.

“Hopefully we can just continue to grow and serve our customers,” he said. “(There was) a lot of learning along the way.”

At the same time, Jacob sees an opportunity to go a little further.

“Just see what areas that we can grow and maybe establish more in the variety of things we can do,” Jacob said.

When it’s all said and done, Turner can look back and know it’s been a fun ride.

“It’s been pretty satisfying knowing that I’ve run a profitable business for that many years and able to turn it over to a successor in good shape,” Turner said. “You meet so many different people and made some good friends.”

Part of a bigger family