Twice as nice: Packers double up their win total against Faribault as doubles teams stay unbeaten

Austin head girls tennis coach Jeff Anderson heard a question he’s probably never been asked before when he was speaking to his team after the Packers beat Faribault 6-1 in Paulson Courts Friday.

After declaring the Packers are now 2-0 overall, one of the players asked him “does that mean we’re first in the Big Nine?” Anderson smiled with his team and said ‘we’re 2-0, so yes it does.”

The Packers (2-0 overall, 2-0 Big Nine) have now matched last season’s win total and the team’s two-year winless streak is now a distant memory for a group of players who are getting more and more sure of themselves each time they take the court.

Austin’s doubles teams swept all three matches for the second straight day and the No. 1 team of Madison Hogan and Lauren Wernimont showed their resilience as they beat Rylie Starkson and Sarah McColley 6-2, 6-4.

“it feels really good to be 2-0,” Wernimont said. “The more we win, the more confident we get. We know that we play well together.”

Hogan said she was surprised by the size of the crowd that the Packers drew in their first home match, but she didn’t let it distract her. She stayed on the same page with Wernimont throughout the win.

“It’s been communication that has helped us. Even if you hit a ball out or hit it into the net, you need to brush it off,” Hogan said. “It happens, but you support your partner, have fun and if you win the match too, that’s great.” 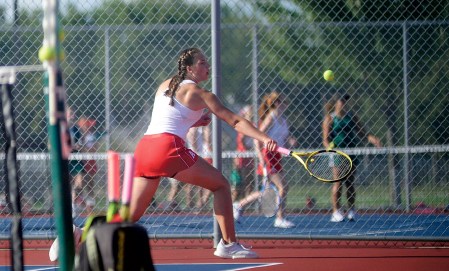 Austin’s Reana Schmitt reaches on a backhand attempt in a No. 1 singles match against Faribault Friday. Rocky Hulne/sports@austindailyherald.com

All six of Austin’s wins were sweeps and No. 1 singles player nearly pulled a comeback off to give the Packers a sweep of the match. Schmitt was beaten 6-1 in the first set against Kyle Patrick, but she rallied back to win the second set 6-2, before falling 10-7 in the tiebreaker.

No. 1 Madison Hogan and Lauren Wernimont (A) def. Rylie Starkson and Sarah McColley 6-2, 6-4 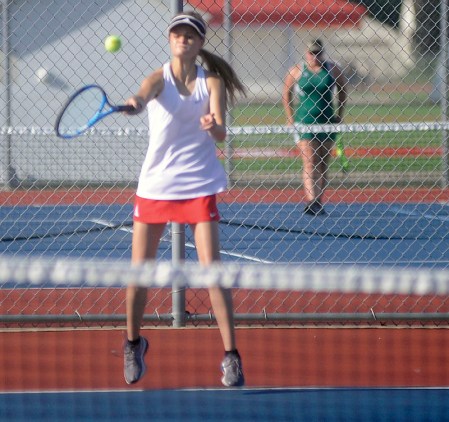 Lauren Wernimont makes a play on the ball in Austin’s No. 1 doubles match. Rocky Hulne/sports@austindailyherald.com

The Austin cross country team had one top finisher as it opened its season in a dual in Mankato West... read more