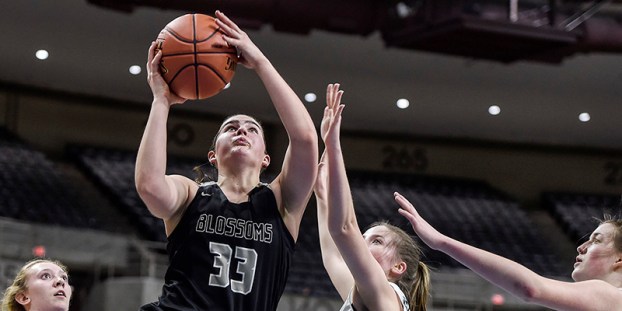 Blooming Prairie’s Megan Oswald goes up strong against Fillmore Central in the first half of the Section 1A championship last March in Rochester’s Mayo Civic Center Arena. Herald file photo

No rest for the best

With basketball commitment out of the way, Oswald focuses on being a Blossom

As soon as she was given the green light, Oswald was playing AAU basketball this summer, and now she has her sights set on being a four-sport athlete for the Awesome Blossoms this fall. So it wasn’t a surprise when Oswald recently made the commitment to play college basketball with an athletic scholarship at the University of Jamestown, which is an NAIA school in Jamestown, North Dakota.

Oswald’s decision wasn’t an easy one and she even begged her parents to help her choose between Jamestown and Briar Cliff University on the eve of her commitment decision. But Oswald had to make the choice herself; now that she has it finalized, she is happy with it.

Oswald started garnering interest from colleges when she posted highlights of herself on a web site during her junior season with the Awesome Blossoms.

“I started late with my recruiting and last month I made my first few visits,” Oswald said. “It was so hard for me and I feel like I just crammed it in, but I know that I made the right choice. It’s a big commitment and a big decision and I just wasn’t sure until I made the decision. Now it feels really great and a lot of stress is gone.”

Oswald has over 1,000 career points and last season averaged 17.9 points, 10.5 rebounds, 2.4 assists and 3.5 steals per game while leading the Awesome Blossoms to the Section 1A title game.

Her 483 points and 295 rebounds last season were school records for BP.

John Bruns coached her in basketball and he’s also her coach in cross country, where Oswald has emerged as BP’s No. 2 runner in her first year running long distance. Oswald also plans on playing volleyball and doing track and field this year if it fits in with her schedule.

“Megan is as hard a worker as they come. Whether it is in the classroom or on the playing field, she is a very driven individual,” Bruns said. “She works hard in everything that she does and that attitude is contagious. She leads by her example and brings everyone else around her up to a higher level. At this point nothing that Megan accomplishes surprises me because I know how good an athlete and person that she is, but I can’t say that I expected her to come out with for cross country and be our number two runner with zero prior experience. Her level of determination and competitiveness is very impressive no matter what the game is.”

Oswald even surprised herself with how well she has handled running cross country this fall.

“I never thought I would go out and just run three miles. That was really hard for me,” Oswald said. “But it pushes me, it builds your endurance and it’s taught me a lot.”

Oswald credits all of her coaches – including Bruns and her junior high basketball coach Emily (Henslin) Voss, who played college basketball at the University of Northwestern, for helping her out along the way.

“Ms. Henslen was a big role model for me and I also want to thank my parents and their support,” Oswald said.

Jamestown is located 411 miles northwest of BP, but it will play a lot of its road games in Iowa, giving Oswald a chance to play near home.

As the election season draws near, candidate signs are covering yards and highways throughout the nation. Darin Voigt, a rural... read more