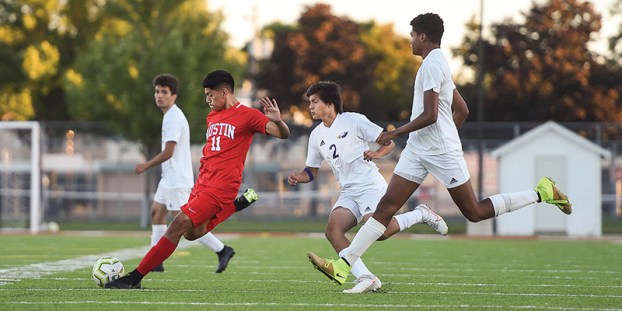 Austin’s Jose Valladares Gonzalaz steps into a shot against Red Wing in the first half earlier this year. Herald file photo

Four for Four: Packers have built a legacy

Five years ago, the Austin boys soccer team had never won a Big Nine title in school history, two of its current starters were in third grade and the thought of going unbeaten in the conference was unheard of.

A lot has changed for the Packers, and it’s all been good. Austin recently brought home its fourth straight Big Nine title and the Packers have lost just one conference contest over that stretch. To say the team has surpassed the expectations of head coach Jens Levisen would be an understatement.

“We have a number of very quality programs in our conference,” Levisen said. “If we can go one season with one loss, that would be great. To have that happen over the course of four seasons, I don’t have any words for it. It says a lot about the effort that they put in during the offseason. There’s definitely a lot of excitement with the soccer climate in town.”

The Packers have also earned three Section 1A titles in the past three seasons and they have their sights set on a fourth section crown when the postseason begins next week.

Austin has built up a soccer program that is self motivated. Players have learned early on that they have to stay active, practice on their own and get to the dome in the winter if they want to make the varsity team.

“You have to want it to be a big part of this team,” Austin senior keeper Casey Berg said. “We all push each other to get better.”

Berg led Austin (9-0-1 overall) to five shutout wins this season, including a 2-0 conference clinching win over Northfield on Tuesday. With Northfield, a Class AA team that led the conference for much of the fall, sitting at the end of the schedule and the COVID-19 pandemic always threatening the season, Berg and his teammates had to stay focused throughout the year.

“We played each game like it was going to be our last because we didn’t know when the season would end,” Berg said. “We had to play our best in each game, because that Northfield game wouldn’t have mattered if we didn’t have the record we had. We all had nerves, but we’ve all played in big games in high school and summer soccer. It drove everyone to start on a high note and it was amazing to win it. We worked so hard to get there.”

While the defense did its part, Packer offense was carried by the likes of Henry Tolbert, Jose Valladeres, who has the third most assists in the state with 13, and Andres Garcia, who is tied for the state lead with 22 goals.

This year has been a special one for Garcia, as he has shared the field with his brother Aiden Martinez, who is an eighth grader.

“I never thought I’d get to play with him. Being a starter as an eighth grader is crazy and I hope to pass everything down to him,” Garcia said. “Those younger guys are going to do everything they can to keep our legacy going.”

Martinez has every intention of following in his big brother’s footsteps as he grew up watching Garcia and the Packers play in state tournaments.

“I was just trying to get better back then,” Martinez said. “This year was awesome. Seeing what they can do and then doing it myself is a lot of fun. You have to work together and play as a team. I’d like to be a great leader like Andres is. I’ve learned a lot this year.”

Like Martinez, Austin eighth grader Joel Thwang has learned quickly that you have to work hard and work together to play varsity soccer in Austin. He started the year a little shell shocked, but he’s grown comfortable on the varsity team.

“We were very nervous at first, because the older guys are so much better than us,” Thwang said. “The team is a family and they treat us like brothers.”

The target on the Packers’ back has grown bigger with each and every conference win they’ve put up over the past four years. That pressure has made the team work even harder as the voluntary dome workouts in the winter have often drawn up to 60 players in the past.

“We know that any team that comes to play against us is going to play their best game,” Levisen said. “Regardless of how their season is going, they’re going to come out to play. If you’re not prepared for that, things aren’t going to go your way. We had to have the mentality of one game at a time.”

Garcia is keeping that mentality, even as his time with the Packers is running out.

“The focus is now on sections, but we can look back a little.,” Garcia said. “We still want to keep going.”

There will be no state tournament this year, but the Section 1A Tournament begins on Tuesday. The first three rounds will be held at high seeds and the final will be played in Saint Charles.

Close out of the gates: Packers fall to Winona in season opener

WINONA — The Austin football team had plenty of chances, but it couldn’t finish the job, losing its season opener... read more