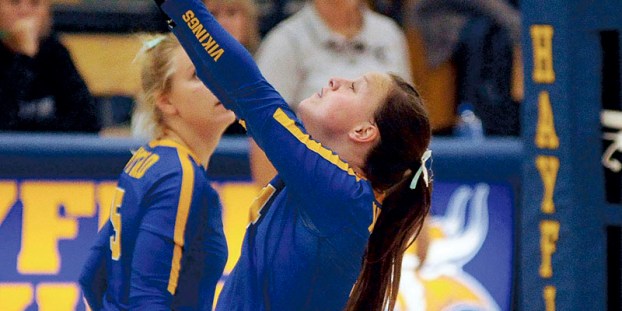 It was Bungum, now a Hayfield assistant coach, who directed Young towards RCTC when she was searching for possible schools to play for.

“Jo convinced me that it would be a good school for me and in that moment I realized that I do want to play college volleyball and they would be a nice school,” Young said. “I wasn’t sure about playing in college at first, and I wasn’t sure if there would be a season next year because of COVID.” 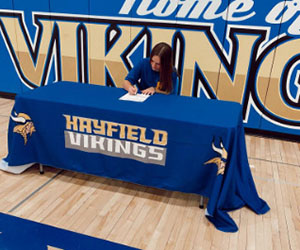 Young finished with 346 set assists, 238 digs, 75 kills and 24 ace serves during a shortened senior season this past fall. She had 590 set assists and 306 digs in a full season during her junior year.

She finishes her Viking career with over 1,600 career set assists and she would have had a shot at 2,000 if not for the pandemic, which shortened Hayfield’s match total and eliminated the postseason.

“It was a crazy year,” Young said. “We were one of the only teams that wasn’t quarantined all year, but then we would have our opponents cancel and we would have to look for an opponent. We never missed a game and that was nice.”

The Yellowjackets went 31-4 overall and competed in the NJCAA National Tournament in their last complete season in 2019-2020. Rutledge was a member of that team.

“I was thinking about Carrie Rutledge when I picked RCTC,” Young said. “The program treats the volleyball players very well and they aren’t expecting to go downhill by any means.”

Young may continue to play setter for RCTC, but she could also be moved to hitter if the lineup dictates. Mostly, she’s just excited to be playing volleyball again.

“I’m so excited. This will keep me organized and keep me busy,” Young said. “Sometimes people are in college just to party, but I won’t have any time for that. It’s exciting to know I at least get two more years of volleyball.”

Athletics toughen up to beat Rockets