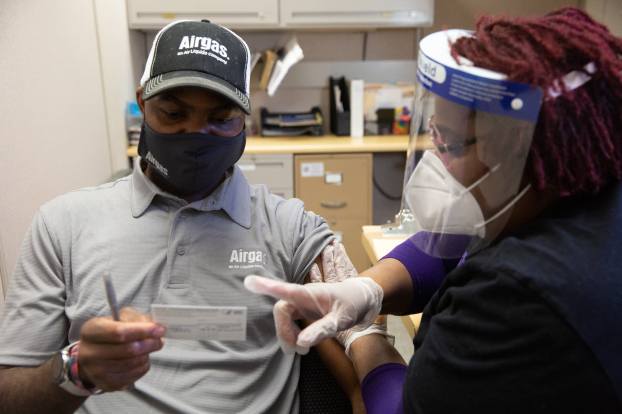 That’s as of Sunday’s update from state health officials. It comes as daily coronavirus case counts, hospital admissions, deaths and the test positivity rate all continue to trend downward from highs seen earlier this month.

But the pace of vaccinations has been lagging in Minnesota — averaging about 50,000 a day over the past week. That’s up from Saturday, but down from more than 60,000 a day at its peak earlier this month.

And officials continue to plead with the public to keep their guard up against spreading the coronavirus. They’re keeping a close eye on rising case counts among teens and young adults.

State Health Department data show nearly 1.8 million Minnesotans have completed their full vaccine series — two doses of the Pfizer or Moderna vaccines or one dose of the Johnson & Johnson vaccine — while more than 2.4 million have at least one dose.

That works out to more than 40 percent of 16-and-older Minnesotans completely vaccinated and more than 55 percent with at least one shot, according to the state’s calculations, including 86 percent of residents age 65 and older.

The state’s efforts have been hampered recently by supply cuts, particularly in the Johnson & Johnson vaccine, which federal authorities paused earlier this month as they investigate the possibility of rare side effects associated with the shot.

The pace may pick up, after federal health officials on Friday lifted the pause on using the Johnson & Johnson vaccine.

“Right before the pause was announced last week, the state of Minnesota had distributed 9,600 doses of Johnson & Johnson vaccine to Minnesota providers,” the Minnesota Department of Health reported in a statement Friday. “Those doses have been stored by the providers who received them and we expect them to be available in the coming days along with any updated information to provide to those getting the vaccine. While Minnesota is not scheduled to receive any Johnson & Johnson vaccine this coming week, we anticipate the federal supply picking back up in the weeks ahead.”

Metrics like hospitalizations and deaths often continue to rise or stay high for a while even as active cases start to ebb. That’s the case in this wave.

Overall hospitalizations have climbed significantly over the past few weeks and are hovering at levels not seen since January. Health officials say coronavirus variants circulating in Minnesota are driving those increases.

The age of those newly hospitalized is trending younger than earlier in the pandemic. The majority of people in the hospital now for COVID-19 are younger than 60.

Known, active cases came in at 16,383 as of Sunday’s state Health Department report, lower than the prior day but still far above the 10,000 active cases seen a month ago. Active cases peaked this month above 20,000.

Given the state’s vaccination push, officials didn’t expect this wave would match the 50,000 active cases seen in the late November surge. But they’ve been anxious about the growth of COVID-19 variants and Minnesotans’ willingness to stay vigilant against the disease.

The percentage of COVID-19 tests coming back positive continues to trend down after a recent upswing. It’s still just a sliver above the 5 percent threshold that experts find concerning.

Seven deaths reported Sunday raised Minnesota’s overall pandemic death toll to 7,079. Among those who have died, about 62 percent had been living in long-term care or assisted living facilities; most had underlying health problems.

The state has recorded 568,243 total confirmed or probable cases so far in the pandemic, including the 1,569 posted Sunday. About 96 percent of Minnesotans known to be infected with COVID-19 in the pandemic have recovered to the point where they no longer need to be isolated.

Regionally, all parts of Minnesota are in better shape than they were in late November and early December. Cases counts were creeping up the past few weeks across the state, but the trend appears to have peaked.

Minnesota officials say they want more testing of middle and high school students because they’re increasingly concerned about the spread of COVID-19 in younger people, particularly those playing youth sports.

Students not participating in sports or other group activities are “still strongly encouraged” to test every two weeks, they said. Middle and high schools are being advised to offer on-site testing.

As it urged more testing, the Health Department also eased its guidance on when student athletes must wear masks.

Officials said players do not have to wear masks while playing outdoor sports but must wear them when not actively playing — sitting on the sideline or the baseball dugout, for instance. Masks must continue to be worn at all times for indoor sports, the agency said.

People in their 20s still make up the age bracket with the state’s largest number of confirmed cases — more than 105,000 since the pandemic began, including more than 55,000 among those ages 20 to 24.

The number of high school-age youth confirmed with the disease has also grown, with more than 45,000 15-to-19-year-olds known to be infected during the pandemic.

Although young people are less likely to feel the worst effects of the disease and end up hospitalized, experts worry they will spread it unknowingly to older relatives and members of other vulnerable populations. Those with the COVID-19 virus can spread it when they don’t have symptoms.

Health Commissioner Jan Malcolm told reporters Thursday that the number of school-related COVID-19 cases in students this week is running higher than in November’s fall surge.

“We really do believe that the end of the pandemic is in sight, but we’re not there yet,” she said. “It depends entirely on the decisions we make now, and over the coming weeks.”