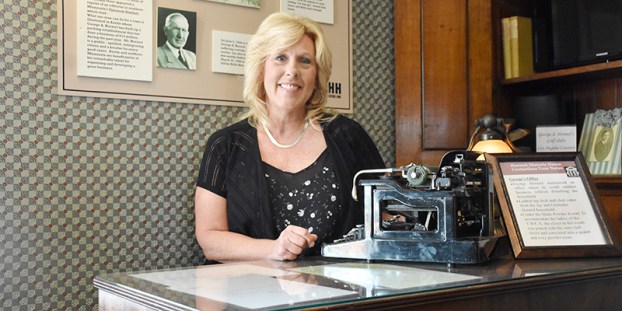 Cindy Meany took over as the Hormel Historic Home’s executive director on May 17. Michael Stoll/mike.stoll@austindailyherald.com

On May 17, Cindy Meany officially took over the reins of the Hormel Historic Home from outgoing director Holly Johnson.

As the new director, the Austin native is looking to bring her hospitality background to help continue the HHH’s mission.

“I’ve been in the hospitality industry pretty much my whole life,” she told the Herald. That experience includes previously owning the Silver Palate in the early 2000s and managing a motor coach that took people on vacations throughout the country and sometimes to other countries.

But Meany said she’s always had a passion for history, particularly the history of Austin and the HHH. As the new HHH director, it is a history that she can delve into more deeply.

“I think the most valuable thing I’ve come to realize is how charitable the Hormel family is,” Meany said. “There are missions we have to carry out, like music and education. Knowing that things like that were important to the family, as well as caring for children with disabilities, has been a real eye-opener and very heart-warming.”

During her brief time as director, Meany has come to realize her favorite aspect of the job: the people.

“We have our Music at the Mansion every Monday night, which brings a huge crowd,” she said. “It’s delightful to see people who return week after week. They’re getting to know me and I’m getting to know them. They’ll pop into chat for a little bit. It’s also interesting to see where people coming to tour the home come from – all across the country – and we love to hear their stories about what brought them to Austin.”

While many of the HHH’s programs are still in place, Meany is looking to add more, such as celebrating the home’s 150th anniversary.

“This is the 150th year since this house was built,” she said. “Even though the Hormel family didn’t move here until 1901, it’s still a significant milestone and we are going to have a 150th birthday for this house on Sept. 17. It will be a Roaring 20s theme and it should be a lot of fun.”

Meany is also hoping to bring about the Lillian’s Table program, which she described as “a brunch or lunch experience in which people will be able to come in and dine at Lillian (Hormel)’s table.”

“That plays into when I owned a restaurant; a lot of what will be served at Lillian’s Table will be things that were created or served back in the day at my restaurant,” she said.

“Back in February, during COVID, Amanda (Barber) and Holly (Johnson) had an event called ‘Just Say I Do,’” she said. “It was like a micro-wedding, and we are going to offer that again on Halloween, New Years Eve and Valentine’s Day. It’s a wedding package where you get your flowers, your cake, your photographer, champagne toast, and your officiant. It’s all you would want in a wedding, but in a shorter version and more intimate.”

Meany also hopes to incorporate more children activities into current HHH programming, such as story time, crafts and other activities during the “Holiday Weekend” held every weekend before Thanksgiving.

“We’re getting members who have small children and we want to be able to offer those members something for their children,” she said. “I feel it’s important for children to learn about history as a whole.